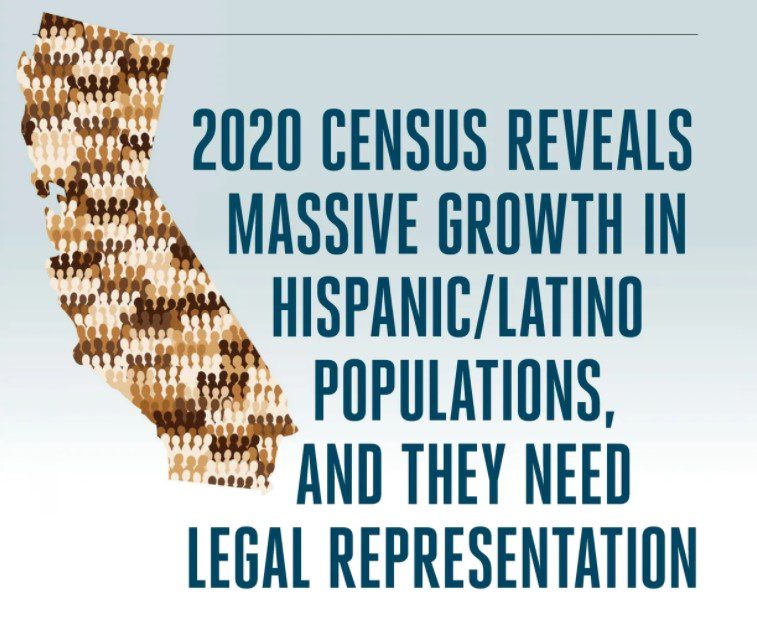 U.S. Spanish-speaking communities desperately need more legal help. The 2020 Census was recently released, and unsurprisingly to many who call the State of California home, people of Hispanic/Latino heritage were shown to represent the largest single ethnic minority group in both our state and national population. Growth in this community in the last decade has been remarkable. According to the 2020 census, there are more than fifteen million Hispanic and Latino people living in California, a rate that is up by 11% from 2010. This increase far outpaces our overall state growth, which rose 6% over the past ten years.

This growth in California reflects a national trend. Throughout the United States, the Hispanic/Latino population grew by a whopping 23%, while the non-Hispanic/Latino population grew only 7.6%. In California, this community has outnumbered whites since 2014, and that gap has only widened as seen from the 2020 Census. Despite these increasing numbers, the U.S. Spanish-speaking community is likely severely undercounted in census efforts, struggles to attain adequate legal services, and is at a severe deficiency with regard to proportional representation in the legal field. The legal community has an opportunity to meet these needs in ways that are mutually beneficial.

Historically, the Hispanic/Latino population in the United States has always lacked representation. Unfortunately, that trend has continued. With regard to recent data, demographer Dr. William O’Hare (adviser to the organization Count All Kids) argues that the net national undercount of Hispanic children alone increased from 365,000 in 2010 to over 830,000 in 2020. Among adults nationwide, 763,000 members of the Hispanic community were estimated to be undercounted in 2010, and with political turmoil surrounding the 2020 census, these numbers are expected to rise. This undercounting is significant: it affects federal funding to schools, budgets for infrastructure, and other aid programs, which can lead to devastating effects for undercounted communities in the future. To combat undercounting, California undertook a massive $187 million outreach initiative targeted at areas with the lowest response rates. Canvassers did their best to convince immigrant families that there were no questions about immigration status on the 2020 Census, but there was still great hesitancy to participate within Spanish-speaking communities. Despite the state’s best efforts, the 2020 California state count came in below the 2019 projection by more than 64,000. Where are those missing and undercounted Californians? According to the Public Policy Institute of California, the majority are undocumented (or closely related to an undocumented individual) and of Mexican, Central American, or South American descent.

Among Hispanic and Latino communities, there is very little representation within the legal field itself as well, despite the immense diversity within our state’s borders. Hispanic and Latino individuals make up nearly half of the California state population, but only 7% of California’s practicing attorneys, and only 12% of California Superior Court judgeships. On a national scale, Hispanic/Latino communities are all but statistically ignored by the US legal system. In addition to having minimal representation within the industry as legal professionals, fewer than 5% of Spanish-speaking refugees and asylum seekers successfully obtain legal representation. Considering the significance of legal help to immigrant groups, this number is shockingly low. When it comes to the Hispanic/Latino population within the United States, two things are abundantly clear: the population is growing at a remarkable rate, and it is substantially underserved.

This disparity means that there is tremendous opportunity for the legal industry to step up. Within California, there are three things that legal professionals can do to bolster this community: (1) Conduct outreach into Hispanic/Latino communities in English and Spanish, and offer legal representation to these groups; (2) research cultural competency to be able to serve this significant part of California’s population; and (3) provide job and advancement opportunities to members of Hispanic/Latino populations.

Concerning outreach, legal professionals should ask themselves if their practice serves the Spanish-speaking community to begin with. If not, they may want to start. For law firms, directly marketing to and servicing the Hispanic/Latino population is an economically rewarding choice, and can be a powerful catalyst for growth. This population has tremendous buying power (Nielsen predicts up to $1.9 trillion by 2023) and is in need of legal assistance. It can be incredibly advantageous to invest in fully bilingual and cross-cultural campaigns to reach Spanish speakers, namely through mobile devices where this community makes life decisions. However, when reaching out in another language, it is imperative to do it right. Simply “Google-translating” an existing message will often lead to miscommunication, confusion, or worse- as seen in several failed corporate Spanish marketing campaigns from companies as large as the Coors Brewing Company, The American Dairy Association, Tropicana, and the Chrysler Corporation. These companies didn’t take into account translation errors or cultural nuance when launching their campaigns, and it cost them millions. Working with fully bilingual and culturally aware partners can help legal professionals avoid the lost revenue, embarrassment, and cultural faux pas that come with translation mistakes.

As evidenced by the undercount in the 2020 Census, this population is also rightfully wary of engaging with the legal system- a system that more often incriminates rather than helps them. Legal professionals need to keep this dynamic in mind. Be up front and clear about whether or not immigration status is relevant to a case, and be patient and empathetic with this target audience. By providing more services tailored to the Hispanic/Latino population, and collaborating with this community to craft their campaigns, legal professionals can build their practices while doing good for their communities at large.

It would also behoove attorneys who choose to work with Spanish speakers to develop greater levels of cultural competency. Cultural competency refers to a set of values, behaviors, attitudes, and knowledge individually or within an organization that allows for communicating and working across cultures. In other words, cultural competency is a form of empathy. When attorneys put forth a concerted effort to develop an understanding of their local Spanish speakers’ values and most needed legal services, they set themselves up to become pillars of trust for that community. The most important thing when developing this cultural competency is to understand that the Hispanic/Latino population is not a monolith. There are racial differences, cultural differences, language differences, and more among this group. For example, Mexicans in Orange County, California will differ greatly from Cubans in Miami-Dade County, Florida or Dominicans in Bronx County, New York. Understanding the cultural makeup within a local area is the first step down the road of cultural competency.

Thirdly, there is a lack of job and career opportunities in the legal field for Hispanics/Latinos. The recent national focus on diversity and inclusion within employment sectors has put this nationwide issue front and center. Nationally, only 4% of practicing U.S. attorneys identify as Hispanic or Latino, despite being the nation’s largest ethnic minority sector. In California, the numbers are especially daunting. When a population makes up nearly half of all the state’s recorded residents, but only 7% of its practicing attorneys, it means that community is facing systemic issues. These issues stem from multiple causes, such as census undercounts leading to a lack of federal funding to schools, high barriers to entry in education, high costs, or a lack of ability to find legal help as an immigrant. Representation in the legal field matters. By hiring and employing members of this population, law firms can make an enormous difference in their local communities, and within their states as a whole. Offering multicultural scholarships and internship opportunities to those at the student level is also highly encouraged. The deficiency in representation for Hispanics/Latinos in law is something that will negatively impact this community for years. However, individual firms can and should do their part to include more underrepresented ethnic groups in the legal system.

By reaching out to this community, putting in the work to develop cultural competency, and making hiring decisions that reflect the makeup of the communities they are a part of, legal professionals can truly prosper while acting upon sound integrity and ethics. Legal professionals have the opportunity to connect the powerless voices in the Latino community to the powerful voices in the legal community. They have the opportunity to change lives. Firms that commit to diversifying their client base so that it is more in line with the population makeup of the state they operate in will see cultural and economic success. The population of Spanish speakers who need legal help is growing at record numbers, and attorneys nationwide are facing an unprecedented opportunity to be a trusted authority in these communities. How to Convert Your Legal Clients with Email Marketing

How to Create Your Law Practice’s Social Media Calendar